Today during Senator Blumenthal's hearing on Lyme Disease, Southern Lyme disease patients and their family members heard something that sounded to them like nails on a chalkboard.  One of the speakers mentioned that there aren't many Lyme disease cases in the Southern USA.  Well, we will excuse him since he doesn't live here and isn't actually witnessing what we're seeing.  But since we've heard this myth time after time, we thought we'd set the record straight.

For many years, patient advocates have heard from thousands of people who report that they have contracted Lyme disease in the Southern USA. Many of these patients have no travel history, produce positive laboratory results, and have a history of tick bite, rash and compatible Lyme disease symptoms.

This is not a new occurrence, as if Lyme disease is slowly creeping down here, but it's something that has been happening for decades.  Many of the cases date back to the late 1980's and early 1990's.

It seems almost everyone in the South knows somebody who has contracted Lyme disease and many people know of several cases.  Patients include doctors, nurses, attorneys, political representatives, and other credible community members.

So...why doesn't the rest of the nation know this?


Because looking at the CDC's National Lyme Disease Case Map, one would never suspect that there are so many Lyme disease cases occurring in the South.

What's wrong with this picture?


We couldn't understand why we hear from so many Southerners with Lyme disease when so few Southern cases appear on the CDC's National Lyme Disease Case Map.  It didn't make sense!  So we did a little checking and, guess what?  In the states we checked, COMPLETELY different reporting practices were used, much different than those employed in the Northeastern United States!  And, apparently federal officials are fully aware of this, but somehow, they fail to note these incredibly significant discrepancies on the National Case Map.


The CDC's National Case Definition for Lyme Disease (Reporting Guidelines) from 1995 - 2008 instructed states to count Lyme disease cases by county.  The CDC guidelines said that once a county documented two or more lab-confirmed Lyme disease cases or found an infected known tick vector, that county could be declared endemic for Lyme disease.  Once endemic, erythema migrans (EM)  rashes ALONE were reportable as cases, no tick bite or positive test required.  This is because erythema migrans (EM) is diagnostic for Lyme disease and if Lyme was documented in that county in two people confirmed by tests, there were no qualms about counting subsequent rashes as Lyme disease cases.  Everyone knows at the time of the rash, most patients won't test positive yet, so reporting only those with positive test results wouldn't really work to calculate the magnitude of the Lyme disease epidemic.  So rashes alone were reportable....in the Northeastern USA.  Numbers in Northeastern states skyrocketed.

An Institute of Medicine Report estimates that

of all reported Lyme disease cases are

But there's one big problem...

In the Southern states highlighted in green in the map above, rashes alone weren't reportable.  (And we strongly suspect the same in other states, as well.)  So, how can we possibly compare statistics?

We found hundreds of counties across the Southeastern United States that have had two or more cases documented in them over the years, and no proof that they are all due to travel.  (In fact, the Centers for Disease Control (CDC)  reported native Lyme disease cases in 27 Georgia counties and others in Florida and Alabama in the late 1980's.  Click here.)  Infected tick vectors have been found in southern counties, too.  Yet these southern counties were not declared endemic, so rashes alone could not be reported.

We often hear about southern Lyme disease cases with tick bite, rash, symptoms and positive test results that are dismissed as "false positives" instead of reported!  Federal public health officials encourage this and discourage testing outside current "endemic" areas despite Lyme bacteria being documented in the South for over 25 years.

Without investigation, cases in the South are routinely dismissed as the mysterious, unreportable "STARI", Southern Tick Associated Rash Illness, which  nobody can seem to put their finger on despite the hundreds of  Lyme bacteria strains discovered in the South. (Once a suspect, a Relapsing Fever spirochete called Borrelia lonestari has now been discarded by officials as the cause of so-called "STARI.")

In 2008 and again in 2011, the CDC's National Lyme Disease Case Definition changed.  Now, areas that are not already declared "endemic" officially have a completely different set of reporting rules, not the same at all as what are used in the Northeastern USA. (It doesn't really matter since the old national guidelines were only adhered to in certain states, anyway.)   Now, the reporting guidelines are far more restrictive, requiring positive lab results outside "endemic" areas - yet, remember, it's estimated that seventy percent of reported cases in the Northeast never had to have positive lab results, only rashes! Rashes alone are still not reportable in the South, but are in "endemic" areas of the North.

To add insult to injury, officials refer to the Southern USA as "nonendemic" and put forth new, more restrictive reporting rules for most states outside the NE USA to follow, even though hundreds of Southern counties already qualified long ago to be endemic by their own previous definition - they would have been endemic, had we been playing by the same rules!

So how could anyone hold up a National Lyme Disease Case Map as if it is an accurate portrayal of Lyme disease infection rates in this country?  We can't compare what's occurring from state to state or region to region.  Federal officials are fully aware of these different reporting practices.  These disparities must be stressed and noted so that those in the Southern USA and any other area of the country where this may be happening are not lulled into complacency.


Because Southern Lyme disease cases have been dismissed as "false positives" or "STARI"  instead of reported,  the truth is, we have no idea how prevalent Lyme disease really is in the Southern United States.  But we hear from Southerners who report that they have contracted Lyme disease two and even three times and families who tell us they have multiple members infected.  This doesn't occur in a region when a disease is "rare."

The CDC's National Lyme Disease Case Map misleads the public and medical providers.  These important differences are not disclosed, causing citizens and medical professionals to assume that Lyme disease is rare in their areas by comparing their state or regional case numbers to those in the Northeastern USA where rashes alone are reportable.  When doctors think a disease is "rare,"  it's not on their diagnostic radar screen.  This adds to the lack of recognition, diagnosis and early treatment of Lyme disease, potentially causing thousands if not millions of patients to needlessly suffer permanent damage and/or persistent infection.

Remember these differences when you look at the CDC's National Lyme Disease Case Map.  Remember that Lyme Borreliosis is being found worldwide. Understand that more Lyme Borrelia species (7) and strains (hundreds) have been documented in the Southeastern USA than in any other region of the country.  And if you develop a rash or symptoms following a tick bite, seek immediate, adequate medical treatment no matter where you live.  (By the way, we do not support the use of the 1 or 2 doses of doxycycline; it left the majority of mice infected in a study).

Case numbers cannot be compared when what is reportable as a case in the Northeastern USA is routinely dismissed in the Southern USA.  Don't let the maps fool you.

What You Need To Know About Lyme Disease in the Southern USA:

In fact, Lyme disease bacteria, Borrelia burgdorferi (Bb) have been documented in THOUSANDS of tick and animal specimens and in many humans from across the South in published studies spanning more than two decades.  More importantly, more Lyme disease bacteria species and strains have been documented in the Southeastern United States than in any other region of the country (see our website NEWS page for details).  The fact that there are more numerous and varied Bb strains in the South, suggests to scientists that Lyme disease bacteria were actually in the Southern United States first, giving the bacteria time to diversify into so many different species and strains, before moving North.


Competent Animal Reservoir in the South?


Check.  The cotton mouse, cotton rat and wood rat are all competent reservoirs for Borrelia burgdorferi.  The white-footed mouse is also found in some areas.  Gray squirrels, chipmunks and shrews are now being investigated as reservoirs, as well.  Even birds and some lizards may be reservoirs.


Check.  And evidence suggests these ticks moved from South to North, not that they are now "expanding their range" down to the South.

Do black-legged "deer" ticks bite humans in the South?


Check.  In fall and winter months, adult Ixodes scapularis "deer" ticks feed on humans on warmer days so humans are exposed year 'round due to our warm climate.

And lest you believe that old myth, "Only nymphal ticks are attached long enough to transmit Lyme disease because bigger ticks are more easily spotted and removed quickly" ...here's an important study published in 1996:


There's not a very significant difference between the number of nymphs and adults attached for over 48 hours, is there?  Adult ticks can easily be missed on a person's back or scalp.


Do People in the Southern USA Test Positive for Lyme Disease?

Check.  Some Southerners do indeed test fully "CDC-reportable" positive for Lyme disease using the very strict 2-tier test methodology.  This indicates that these patients are infected with a Borrelia burgdoreri sensu stricto B31 type strain or one closely-related, known to cause Lyme disease in the Northeastern US.  These and many other strains of the species Bb sensu stricto have been documented in the Southern USA.  Additionally, other diverse Lyme Borrelia species and strains are found in the South and some are newly discovered.

A study of southern erythema migrans (EM) rash patients published years ago concluded that Southern Bb strains are so genetically different, the South needs its own Lyme disease testing system!  We still await these tests.  Many Southern Lyme disease cases are likely missed using the current unreliable tests which are designed to detect a few strains of a single Bb species.

Until next time, please remember to do a tick check daily...even in the winter months especially in warmer climates. 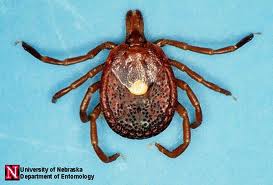 "STARI":  Is It Really Just Lyme Disease? An Evidence-Based Evaluation.