Again at the request of Georgia Lyme Disease Association 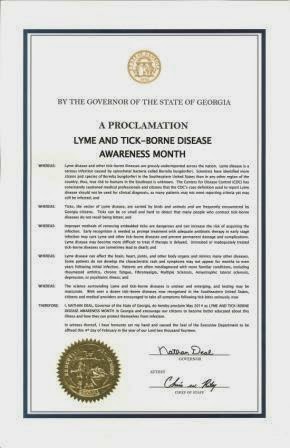 For the fifth consecutive year at Georgia Lyme Disease Association’s request, our Georgia governor has issued a statewide proclamation deeming May, Lyme and Tick-Borne Disease Awareness Month.  People living in the southeastern United States encounter ticks so frequently, GALDA again thanks Governor Nathan Deal for his concern about protecting the health of our citizens through the promotion of educational and preventative measures.

Working with GALDA, Georgia was the first state in the southeastern USA to issue a statewide awareness proclamation in 2010.  GALDA board members have since consulted with patient advocacy organizations in surrounding states, and other states have now issued Lyme Disease Awareness Month proclamations including Alabama (2013 and 2014), and new for 2014, Kentucky, Tennessee, North Carolina and Florida.  We’re encouraged to see states taking such a proactive stance to try to prevent tick-borne illnesses in our citizens.

Georgia Governor Nathan Deal and Georgia Lyme Disease Association urge citizens to become educated about ticks, the diseases they may carry, and ways to prevent tick bites.  We encourage people to learn how to remove a tick properly, since improper removal and/or touching a tick with bare fingers may actually result in disease transmission in some cases.  The public should become familiar with the signs and symptoms of tick-borne illnesses and seek immediate medical help should symptoms develop.

Ticks in the southeastern USA may transmit one or more of several pathogens including:

Lyme disease-causing bacteria - Borrelia burgdorferi sensu stricto, possibly Borrelia andersonii, Borrelia americana and Borrelia bissettii as newer research suggests.  Other Lyme Borrelia species may also produce disease in humans, more studies are needed. At least six different Lyme Borrelia species have been identified in the southeastern USA, more than in any other region of the country.  Current Lyme disease testing criteria are only geared to detect a single strain of one Lyme Borrelia species, so many cases may be missed by available tests.  Of Note: Restrictive southern reporting practices (quite different than those used to report cases in the Northeastern USA) have prevented the reporting of thousands of southern Lyme disease cases for decades, making it appear as if Lyme disease is not a problem in this region.  Thousands of patients and many doctors can attest that Lyme disease is a significant problem in our area.
Relapsing Fever Borrelia – Borrelia turicatae.  In addition, the newly-identified relapsing fever organism Borrelia miyamotoi has been documented in wild turkeys from Tennessee.  Human studies in the SE USA are needed.   No commercial test is available yet for B. miyamotoi.

Ehrlichia – including Ehrlichia chafeensis, Ehrlicha ewingii – cause of Ehrlichiosis.  May produce very serious, acute symptoms and even lead to death in just a short period of time.  If suspected, many doctors will just go ahead and prescribe doxycyline because taking a "wait and see" approach can be so dangerous.

Coxiella burnettii – causes Q-Fever.  Cases have been reported in Georgia and Tennessee, though tick bites are not believed to be the major source for most cases of this disease.

Bartonella – causes Bartonellosis; Bartonella henselae is most commonly known though there are many species.  May be transmitted by other vectors, but in recent years, ticks have also been implicated.  Other Bartonella species have also been found infecting humans.  See Dr. Ed Breitschwerdt’s work at North Carolina State University College of Veterinary Medicine.

Francisella tularensis – causes Tularemia, generally rare.  May be contracted through other vectors and means.

Tick-borne Viruses?  New Heartland Virus and Phlebovirus have been identified in lone star ticks from other regions in recently.  Lone star ticks, Amblyomma americanum, are the tick species most commonly found biting humans in the southeastern USA as well as in many other states, including Virginia.  More studies need to be performed in this region to determine the prevalence of these and other tick-borne disease-causing organisms in humans.

Tick Paralysis:  Not a disease, but a very serious condition or affliction.
See GALDA’s webpage, Other Tick-Borne Diseases for more detailed information.